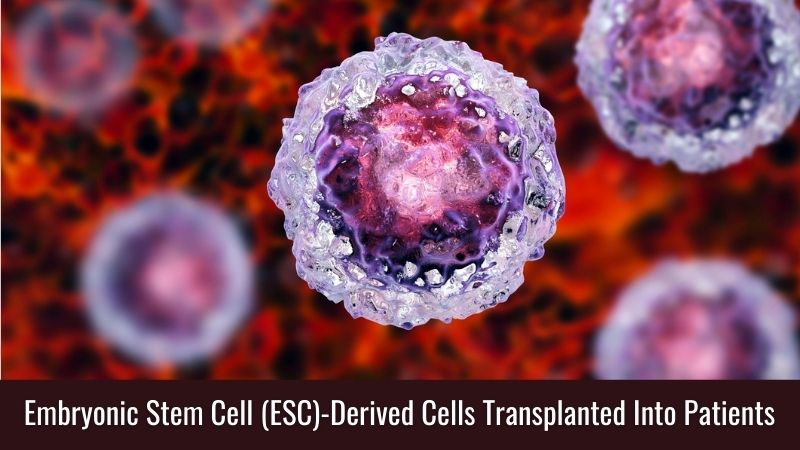 In the spring of 2018, two reputable scientific journals – Nature Biotechnology And Science Translantional Medicine – published articles about the first experience of transplanting a layer of retinal pigment epithelium (RPE) cells grown from stem cells, with age-related macular degeneration (AMD). This article provides a brief overview of the literature on this therapy.

Before introducing the technology of cell or tissue transplantation into clinical practice, at least two problems must be solved. First, it requires finding a commercially available source of stem cells and getting approval from regulatory agencies such as the Food and Drug Administration (FDA). Secondly, it is necessary to develop and improve methods of differentiation and maturation of cells, as well as methods of their surgical delivery. This path can only be traversed thanks to the advanced achievements of science, medicine and engineering.

Embryonic human stem cells are allogeneic material and therefore have a certain potential for rejection due to a mismatch of the surface proteins of the histocompatibility complex. Patients who have undergone cell implantation with a lack of histocompatibility need long-term systemic immunosuppression. Induced pluripotent stem cells, obtained from their own mature cells, have excellent histocompatibility but may have age-related mutations in the genetic material.

Obtaining suitable autologous RPE cells from induced pluripotent stem cells is a long and expensive procedure. In addition, reprogramming cells can increase their potential for proliferation and provoke the development of cancer.

Subretinal and intravitreal administration of a stem cell-derived RPE cell suspension has some efficacy and is fairly safe. However, using these techniques, it was not possible to restore the lost pigment epithelium in the zone of geographical atrophy. It is believed that some of the effectiveness of these techniques is associated to a greater extent with paracrine mechanisms that provide support for the remaining retinal tissue outside the zone of geographic atrophy.

The next step in the evolution of cell therapy was an attempt to restore the zone of geographic atrophy by implanting a monolayer of polarized RPE cells, which could mimic the natural structure of RPE and, possibly, its functions. Monolayer implantation could theoretically have advantages over the introduction of a cell suspension.

Transplantation of a monolayer of RPE cells requires a supporting membrane similar to the natural Bruch membrane. Such a membrane should be semipermeable in order to retain RPE cells and, at the same time, ensure full diffusion of substances between the retina and the choroid. The literature describes attempts to use various natural substances as a scaffold for placing cells – the amniotic membrane, hyaluronic acid, gelatin, fibrinogen, silk, collagen and the anterior lens capsule.

However, natural substances cannot always be obtained on a large production scale. They can have variable physical characteristics, are potentially allergenic and, in addition, can carry various diseases. Despite this, the literature describes one clinical case of the use of a collagen membrane in the treatment of neovascular AMD. Mandai M. et al. performed the transplantation of the RPE cell layer obtained from the induced pluripotent stem cells to one patient. RPE cells were cultured on a collagen scaffold, and then immediately before implantation, the scaffold was destroyed using collagenase.

There were no serious side effects of surgery during the 25-month follow-up period. No deterioration or improvement in maximum corrected visual acuity occurred. The transplantation of RPE cells planned for the second patient was not performed due to the detection of mutations in the DNA of RPE cells obtained from induced pluripotent stem cells. The recruitment of participants for this study was carried out in 2015.

Synthetic membranes are an alternative to natural substances. The production of synthetic materials is easier to control and products are more uniform, but their biocompatibility remains controversial. In a recent clinical study by the London Project to Cure Blindness, the use of polyethylene terephthalate (PET) as a scaffold for RPE cells derived from human embryonic stem cells resulted in massive subretinal bleeding in two patients with neovascular AMD. PET is the most commonly used non-biodegradable thermoplastic polymer in the polyester family, also used in garments and containers. However, although one of the patients developed proliferative vitreoretinopathy, which required revision of the vitreous cavity, both patients showed improved vision and increased reading speed.

Parylene is a non-biodegradable substance that has been successfully used in vitro, as well as in animal and clinical studies. Recently, preliminary results from a Phase 1 study were published in which this structure was implanted in four patients with advanced dry AMD and geographic atrophy. After surgery, one patient experienced an improvement in vision by 17 letters, while two other patients showed an improvement in visual fixation. These encouraging data warrant further studies with a longer follow-up period and control groups.

In general, the results of the conducted clinical studies demonstrate the potential of RPE cells grown from induced pluripotent stem cells and human embryonic stem cells in replacing degenerative tissue in AMD. Although all studies were conducted on a small number of patients with advanced stages of the disease, the small number of complications and side effects, as well as improved visual acuity and visual functions, suggest that cell replacement technology in the area of ​​RPE loss is a promising therapeutic technology. To clarify the effectiveness of various cell technologies, large complex studies are required. The results obtained give hope that over time, the problem of the most common cause of vision loss in the Western world will soon be resolved.